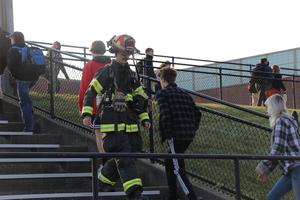 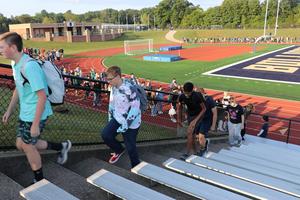 OHS students marked the 20th anniversary of the 9/11 attacks in a unique and meaningful way, by walking a few steps in a firefighter's shoes.

Each year on the anniversary of the 9/11 terrorist attacks, firefighters across the country take part in commemorative stair climb events, walking the equivalent of 110 stories of the World Trade Center towers. On that fateful day, firefighters climbed the towers to rescue others. Otsego firefighters have taken part in those events, but this year, decided to hold the event here at home, at Bulldog Stadium, and invite Otsego High School to take part.

Even though OHS students weren’t born when the attacks took place, the school marks the anniversary each year with the reading of the events of what happened that morning and a moment of silence. This year however, they took the extra step to join our local firefighters.

Throughout the week, our student leaders read daily announcements to share the facts and history of the 9/11 attacks. On Friday, after a short announcement, each classroom went outside to their usual fire drill location then walked to Bulldog Stadium. When they arrived, three firefighters with the Otsego Fire Department had started their stair climb event. It would take them 9 and a half trips around the stadium, up and down the stairs of the bleachers to reach 22,000 steps, or the equivalent of 110 stories. It’s an event that takes three hours to complete.

Students silently walked to the stadium, down the ramps to the track, then up one flight of stairs to the stop of the stadium and back into the high school. Even though students only joined them for a few minutes, it was a powerful few minutes where the events of that anniversary and that day were tangible. The students could see the firefighters in their full gear walking up and down the bleachers, sometimes passing them depending on timing.

“Our kids are proud to take some time to commemorate this moment of history, to support the efforts of our local firefighters, and to contribute to taking care of families of fallen firefighters,” says Herve Dardis, OHS Principal.

These firefighters also created a virtual team to raise money for the Fallen Firefighters Foundation that helps families of firefighters who died on 9/11. The link to their team fundraising page is here. Our students donated to their cause, raising $717.